The Fight for Women’s Reproductive Justice in Latin America: The Case of Argentina and the Ni Una Menos/Marea Verde Sociopolitical Movements 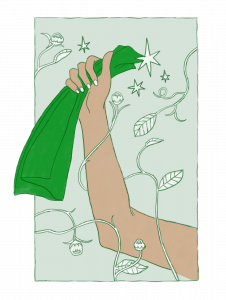 The struggle for women’s rights around the world is a complex and multifaceted issue, with no single clear path to emancipation. Feminist activists in Latin America have spent several decades fighting against various forms of violence against women, and in recent years, they have begun to see some of their hard work pay off. In this paper I show how the various political struggles of feminist activists in their fight against patriarchal oppression are interconnected and build upon one another to bring about change. In order to do this, I analyze two case studies in Argentina: the Ni Una Menos (Not One Less) and Marea Verde (Green Wave) sociopolitical movements in the fight against femicide and for reproductive justice, respectively. The Ni Una Menos movement began in 2015 as a response to femicide in Argentina, and eventually helped to establish a successful political campaign for abortion rights also known as the Marea Verde movement, culminating in the partial legalization of abortion in Argentina in December of 2020. So, how did a women’s rights movement standing up in opposition to rampant violence against women and femicide in their country, lay the groundwork for a successful campaign for women’s reproductive rights resulting in the legalization of abortion in the country?

Although activists in Argentina had been fighting for legal access to abortion for over 30 years, it is only with the emergence of the Ni Una Menos movement against femicide in the country, which ultimately gave rise to the Marea Verde movement, that feminist activists were able to successfully mobilize public outrage through wide-spread social protests and work together with their government to legalize abortion in the country. Certainly, the current success of abortion legalization is partially due to the culmination of decades of work from women’s rights activists and organizations. However, it is thanks to a cultural shift, partially driven by conversations on social media and media coverage in framing the lack of access to legal abortion as a form of state sponsored violence or femicide, that established new political pressures on the Argentinian government to transform their policies. Thus, the convergence of various political factors in Argentina allowed this particular social movement to harness public outrage at the murder of a woman and transform it into a tangible increase in the legal rights available to large numbers of women in Latin America. These include: the diminishing role of the Catholic church in the state, the use of social media platforms to mobilize a massive social and cultural movement, as well as the emergence of new discourses around reproductive justice in the country.

Access to abortion in Latin America, like in much of the rest of the world, is a highly contested social and political topic, in part due to the fact that “[a]bortion challenges religious doctrines and cultural norms about women’s traditional roles in society” (Lopreite 2022). The strong culture of machismo in most of Latin America enforces a strict understanding of traditional gender roles, in which women are portrayed as child-bearers and mothers. This, in part, leads to a cultural hesitancy to allow women the right to choose whether or not to abort. Another factor for the heavy restriction of abortion in the region can be attributed to the role of the Catholic Church. On the grounds of religious belief, the Catholic Church stands out as a major adversary against voluntary access to abortion. Because they traditionally hold strong political influence in the governments in much of Latin America, they have for a long time worked to maintain restrictive abortion regulations. However, as a new, more secular generation is growing up, many are taking back the power to make choices about their own bodies independent of religious institutions.

In Argentina, the discussion surrounding abortion began with the end of the dictatorship in the 1980s, and in 1986 the Encuentros Nacionales de Mujeres (National Meetings of Women) was established. This annual meeting is happening to this day to advance feminist agendas in the country. In 2003, the Encuentros Nacionales created the Campaña Nacional por el Derecho al Aborto Legal, Seguro y Gratuito (Campaign for Legal, Sage and Free Abortions), a major player in the fight to reverse legal decisions made to ban contraception access in Argentina. The Campaña Nacional and other feminist organizations created an important political framework as well as legal precedent within the Argentine government for the later Ni Una Menos/Marea Verde movements to mobilize their political demands upon.

In 2015, the murder of pregnant 14-year-old Chiara Páez by her 16-year-old boyfriend (who was against her keeping the baby) sparked massive public outrage in Argentina and the Ni Una Menos movement was born. On June 3, 2015, several weeks after Páez’s murder, tens of thousands of women in Argentina took to the streets in protest, demanding systematic change. Thanks to modern communication and the viral social media hashtag #NiUnaMenos, the movement quickly spread across Latin America and further internationally. When it began, the movement was focused on bringing the issues of violence against women, rape, and femicide to the public’s attention. The now yearly Ni Una Menos protests have since transformed into an international and gender-inclusive intersectional feminist political campaign actualizing concrete policy change on various fronts in the legal and political systems across Latin America.

Through these protests, a wide range of feminist activists – from journalists, to lawyers, to the everyday Facebook or Twitter users – were able to use social media channels as well as conversations in the public media to end the taboo on vocalizing gender violence in their society and share their own experiences. Within this discursive shift, a link between illegal abortion and institutional violence against women on a societal level was rationalized. Activists in the region “characterized the state’s blocking of legal, safe, and free abortions as violence, and frame[d] the deaths of women for clandestine abortions or risky pregnancies as state-sanctioned femicide” (Cabas-Mijares 2019). By framing the lack of access to legal abortion in such a way, feminists were able to transform collective cultural beliefs about the oppression of women by the state and create new political pressures for government policies to change.

With the emergence of the Ni Una Menos movement, the Campaña Nacional saw an opportunity to expand their influence. In 2018 the two movements joined forces to create a new social movement known as La Marea Verde. Activists wear green handkerchiefs at demonstrations and in their daily lives as a feminist symbol demanding political change for women’s reproductive rights. La Marea Verde was successful in securing the partial legalization and/or decriminalization of abortion in Mexico in September of 2019, Argentina in December of 2020, and in Colombia in February of 2022. Despite strong resistance to these changes, for example by the Catholic Church, overall they indicate a revolutionary cultural transformation in Latin America.

Even though the final result of this cultural change is remarkable, the process that led to this revolution was the result of lots of hard work by many different actors and events over many decades. Key to the success of these movements was the opening up of discourse in the country about topics that for many years had remained taboo. It was through the use of viral social media hashtags and open debates among the media sources in the country that women were able to speak out and demand change. In this case, social media and communication technologies were much more than just a tool to express a political opinion; it was the space where collective political action was able to coordinate and mobilize to push the legislators of Argentina to make necessary changes to the legal system, and set an example for the rest of the region.

However, the fight is not over yet. Femicide and extreme violence against women remains a massive problem in Latin America. The circumstances are getting more difficult in wake of the Covid-19 pandemic, as economic insecurity increases women’s risk of gender-based violence. The struggle for emancipation from patriarchal domination can sometimes feel hopeless, yet if we ever hope to see a world where women aren’t killed simply for being women, where individuals are allowed to make decisions about their own bodies and health care, and where women can feel safe in their own communities, wherever they may be, we must not give up and instead demand together- NI UNA MENOS!

Diaz, Jaclyn (2021): How #NiUnaMenos grew from the streets of Argentina into a regional women’s movement. NPR.org, October 15.

Dvoskin, Gabriel (2021): Between the Urgent and the Emerging: Representations on Sex Education in the Debate for Abortion Legalization in Argentina. Frontiers in Sociology, Vol. 6, Art. 635137.